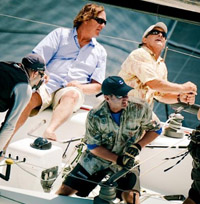 McNeil, Horton benefiting from past experience on Santa Monica Bay

Marina del Ray, Calif. (June 19, 2014) - Kevin McNeil has sailed his Star boat in big regattas on Santa Monica Bay. Andy Horton competed in the 2007 Olympic Trials for Star class on the same body of water. That combined experienced has helped the Nightshift team post consistent results in an extremely tricky venue this week.

McNeil has done a superb job of steering while Horton has been solid calling tactics to help Nightshift string together six strong races to open the California Cup, being held on Santa Monica Bay.

Conditions on the ocean course off Venice Beach for Thursday's action were quite similar to the day before (8-12 knots out of the southwest) and Nightshift  was dialed in again. McNeil steered the Annapolis entry to a splendid score line of 3-4-1 to earn Boat of the Day honors for the second straight afternoon.

"We had another good day. Our starts were not as good as yesterday and we got into a couple tough spots, but our boat speed was excellent and we were able to work our way back to the front," McNeil said. "Andy made some great calls out on the course and our crew work was outstanding all-around."

Skipper Kevin McNeil (blue polo shirt) keeps his eyes forward while trimmer Dave Scott (white hat) checks the telltales on the main during Thursday's action in the California Cup. Nightshift was Boat of the Day for the second straight afternoon and leads the 15-boat regatta with a low score of 14 points, seven better than Flash Gordon 6 and Plenty .

In Race 6, Nightshift rounded the first weather mark in fifth place. Two legs later, the plain white boat with aqua blue deck was leading the fleet around the top mark as it headed for home to post its second bullet of the regatta.

"We've done really, really well on the runs. That was the key to winning the last race today," McNeil said.

Horton agreed with that assessment and credited McNeil with skilled steering under spinnaker. "Our downwind speed is the best it's been since I started sailing with this team," the veteran professional and Vermont native said. "Kevin is doing a really good job of driving to take advantage of when the puffs and waves come on."

Horton isn't sure the previous experience he and McNeil have on Santa Monica Bay has provided a major advantage, but said familiarity with the unpredictable conditions gave them a certain awareness that is helpful. Nightshift has finished no worse than fourth in six races so far and has a low score of 14 points, increasing its lead in the overall standings by three with Thursday's performance.

"You need to have your eyes open for anything. You really can't see the pressure on the water. So instead of sailing against the wind, you need to sail against the other boats," said Horton, adding that Nightshift cannot become cautious now as it attempts to maintain the lead for two more days. "If you start to get conservative and over-thinking it in this place, it's going to be over. We have to continue doing exactly what we've been doing."

Flash Gordon 6, skippered by Chicago architect Helmut Jahn, got the gun in Race 4 and posted the second-lowest point total on Thursday. Four-time world match racing champion Ian Williams is calling tactics for Jahn, who also notched a third on Thursday and holds second in the overall standings with 21 points.

"We are happy, but we would be a lot happier if we were winning the regatta," Jahn said with a laugh. "We are only halfway through so there is still time. I think we could be a bit more consistent. We finished fifth in the last race on Wednesday and sixth in the last race today. We have to find a way to get rid of those high numbers."

Blade 2 is a Corinthian entry skippered by Michael Shlens, a first-year Farr 40 owner. Shlens and his team are proving fast learners as they won Race 5 on Thursday and stand seventh in the overall standings within the 15-boat fleet. Blade 2 has a commanding 24-point lead in the Corinthian standings, comprised of boats with no pros onboard.

One of the most impressive performances on Thursday came from skipper Michael Shlens and his team aboard Blade 2. A Corinthian boat comprised entirely of amateur sailors, Blade 2 surprised the 15-boat fleet by leading from start to finish in Race 5.

"We are very, very excited to win a race in such an incredibly competitive fleet," said Shlens, a Palos Verdes resident and King Harbor Yacht Club member. "We had a beautiful start and punched out very quickly. It makes a big difference when you can sail with clean air and we worked hard to hold the lead. You have to be able to hit the shifts out there and we were fortunate to able to do that."

Shlens has campaigned an Express 37 for almost two decades and also races a Melges 30. This is his second year in the Farr 40 class and first time competing against the professional teams that regularly do the International Circuit.

"It's been a big transition and we're on a huge learning curve," Shlens said. "We've really had excellent crew work so far this week, which makes sailing the boat a real pleasure. This boat is so crew dependent. I'm getting a feeling the helmsman is the least important person aboard."

Shlens had high praise for the performance of tactician Greg Tawaststjerna along with the jib and spinnaker trimming of Alan McGashan. He credited Eric Arndt with doing an excellent job of rig tune prior to the regatta.

"What I'm most pleased about is that we're getting better with every race. We are improving and that is what is most important," Shlens said. "Winning that first race was wonderful, but I was more proud of the third race when we finished eighth. We were over early and started way behind, but had the speed and crew work to pick our way back through the fleet."