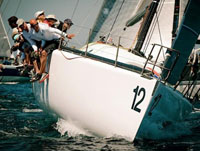 And if Wednesday's action is any indication, racing over the course of the four-day regatta being hosted by the California Yacht Club will be tight, tricky and a real test of skill for skippers and crews.

Principal race officer Peter Reggio reeled off three starts in rapid succession and there were three different winners on the day. Santa Barbara skipper John Demourkas and his crew aboard Groovederci rounded the first weather mark in first and was able to maintain that lead the rest of the way in winning Race 1. Annapolis skipper Kevin McNeil and his team on Nightshift took advantage of a late mistake by Plenty to win Race 2. Finally, Wolfgang Schaefer steered the German entry Struntje Light to a come-from-behind victory in Race 3.

"It was an absolutely spectacular day on the water. This is a great area to sail with Venice Beach providing a beautiful backdrop," Farr 40 class manager Geoff Stagg said. "As you can see by the fact we had three different winners on the day, the racing is extremely close and a number of boats are sailing very well."

Nightshift, skippered by Kevin McNeil of Annapolis, Maryland, won the opening day of the California Cup with a solid score line of 3-1-2 on Wednesday on Santa Monica Bay.

Nightshift was the overall winner of the day with McNeil steering the Maryland entry to a solid score line of 3-1-2. Andy Horton is calling tactics while Dave Scott and Rich Bowen are trimming the main and jib, respectively, on Nightshift, which entered the regatta fourth in the overall standings for the 2014 International Circuit.

"It's tough conditions out here. The wind is up and down and all-around. You'd get headed, tack then get headed again. You really had to be on your toes," McNeil said. "We got good starts, had nice speed coming off the line and were pretty much able to sail our own races."

Horton said the strategy on Day 1 was to be conservative and stay out of the corners since no side of the course was clearly favored and significant shifts could happen at any time.

"I've sailed in this venue before and it is very unpredictable, anything can happen," Horton said. "I told the crew before the first race that when you start feeling good, that's when it is time to be worried. There are a lot of localized wind patterns here and things can change in a second."

Horton echoed the sentiments of Plenty tactician Terry Hutchinson when discussing the overall approach going into Wednesday. "You can't win the regatta on the first day, but you can certainly lose it so let's not make any major mistakes."

"We definitely got three good starts and we're going pretty well upwind," Horton said. "That being said, we didn't hit it out of the park today. We certainly could have done better."

McNeil was short and sweet when asked if there was anything he learned on Wednesday that will help him for the rest of the regatta. "Yea, get ahead and stay ahead."

Skipper Alex Roepers and Plenty came into the California Cup leading the 2014 Circuit and continued to sail well on Wednesday, sandwiching a pair of fourths around a second.

Plenty sandwiched a pair of fourths around a second and is second in the overall standings with 10 points, four astern of Nightshift. The New York entry leads the International Circuit standings after capturing the Rolex North American Championship last month.

It was a day of rallies for Plenty, which passed a total of nine boats in three races. Biggest comeback came in Race 3 as Roepers steered his boat from eighth at the first weather mark to fourth at the finish.

"We are happy with our results at the end, but we were struggling a bit along the way," Roepers said. "We really had to work hard to climb back from some deep positions in the first and third races. It just shows how tough the competition is here. The fleet was really mixed up the entire day."

Plenty was fighting Nightshift for the lead going into the second weather mark in Race 2 when it used a lee-bow maneuver to briefly take the lead. However, Plenty had to pinch hard to get around the mark and did not succeed - scraping the buoy and having to perform a 720 as a result.

Flash Gordon 6, owned by Helmut Jahn of Chicago, also showed nice consistency in putting up results of 2-4-5 and stands third overall with 11 points. Struntje Light went from third around the top mark to first at the finish in Race 3 to pull within one point of the Italian entry Enfant Terrible in the fight for fourth.

Skipper Helmut Jahn is the picture of focus and concentration as he steers Flash Gordon 6 to third place in the overall standings on the opening day of the Farr 40 California Cup.

Three regattas into the 2014 circuit and the Corinthian boats from the West Coast fleet are proving they can hang with the professional teams. Cabrillo Beach Yacht Club member Gordon Leon and his crew aboard Foil sailed superbly in Race 1 and finished fifth, which brought fists pumps from the crew. King Harbor Yacht Club member Michael Shlens and his team on Blade 2 posted all single digit results and is ninth in the overall standings.

"You can clearly see the level of performance among the Corinthian boats improving with each regatta. Several of them are really coming on strong," Stagg said. "Foil sailed a brilliant first race and their sailors were over the moon about the result. When you go out and beat the current world champion that is a great accomplishment."

JoAnn, skippered by Steve Murphy of Seal Beach, is a West Coast entry that isn't quite Corinthian, but also had a very strong showing on the day - securing seventh overall on the strength of a third place in Race 2.