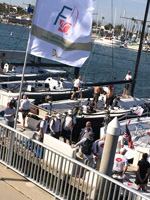 Long Beach, California: After tearing up race courses on the East Coast for the past two years, there has been a change of scenery for the grand prix Farr 40s as action in the Northern Hemisphere has relocated to the west coast for 2014. The next chapter in the class' history will be written this week at the Rolex Farr 40 North Americans when the 19 registered owner-drivers go head-to-head over four days of racing (May 14-17) hosted by Long Beach Yacht Club.

To handicap the field, one needs look no further than the 2014 season opener held at Cabrillo Beach Yacht Club in March:

Alberto Rossi and his Italian team on Enfant Terrible scored the first win of the season to pick up right where they left off last fall when they won the 2013 Rolex Farr 40 World Championship in Newport, R.I. Annapolis' Kevin McNeil at the helm of Nightshift, who was second at the worlds (after losing a tie-breaker to Rossi) , finished behind New York's Alexander Roepers, on PLENTY, to round out the top-three at the CBYC event.

Not to be undervalued are two class stalwarts: Chicago's Helmut Jahn on Flash Gordon 6, the2012 Farr 40 World Champion, or Wolfgang Schaefer on the German-flagged Struntje light. When you factor in the local threats, including Jeff Janov, who drove Dark Star to the Rolex Farr 40 North American title when it was last held in Long Beach, in 2011, the California tour is shaping up to be full of heated competition.

"It is really great to see the Farr 40s again sailing on the west coast of the US again," said San Francisco's Norman Davant, tactician on Twisted. "The boat is still today one of the best one-design platforms in the world to race and I look forward to getting back into the class. We are really looking forward to the summer of racing culminating in the Rolex Big Boat Series to determine the fleet champion, and then the Rolex Farr 40 World Championship, both of which will be hosted by St. Francis Yacht Club."

Leading brand of the Swiss watch industry, Rolex, headquartered in Geneva, enjoys an unrivalled reputation for quality and expertise the world over. Its OYSTER watches, all certified as chronometers for their precision, are symbols of excellence, performance and prestige. Pioneer in the development of the wristwatch as early as 1905, the brand is at the origin of numerous major watchmaking innovations, such as the OYSTER, the first waterproof wristwatch, launched in 1926, and the PERPETUAL rotor self-winding mechanism introduced in 1931.

Rolex has registered over 400 patents in the course of its history. A truly integrated manufacturing company, Rolex designs, develops and produces in-house all the essential components of its watches, from the casting of the gold alloys to the machining, crafting, assembly and finishing of the movement, case, dial and bracelet. Rolex is also actively involved in supporting the arts, sports, the spirit of enterprise, and the environment through a broad palette of sponsoring activities as well as philanthropic and patronage programs.