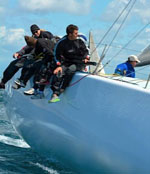 The Farr 40 Midwinter Championship got off to a rip-roaring start as 16-18 knot westerly winds buffeted the 16-boat fleet, making boat-handling challenging for skippers and crews while providing exciting racing.

Skipper Kevin McNeil and his crew on Nightshift handled the heavy air off Cabrillo Beach the best on Wednesday, posting a pair of seconds and a fourth to take the early lead in the four-day regatta. Nightshift has a low score of eight points, two better than Alex Roepers and the Plenty team.

"It was a great day on the water. It was really blowing out there so it was a challenge," McNeil said. "It's all about preparation and crew work. We spent four days tuning up before the regatta and that made all the difference."

Annapolis (MD) skipper Kevin McNeil and his Fleet Transit team on Nightshift hold the overall lead after a wild first day of racing at the Farr 40 Midwinter Championship.

"It's all about the crew. Andy Horton was on his game today and we had good boat speed," McNeil said. "The good news is that we can do better. I know I can do a better job of driving."

Cabrillo Beach Yacht Club in San Pedro (Cal.) is hosting the Midwinter Championship, which is the opening regatta on the 2014 International Circuit. Principal race officer John Busch was able to reel off three races in succession with minimal course changes as the wind held fairly steady from 255 degrees.

In Race 1, the left side paid on the first upwind leg and tactician Bill Hardesty called it correctly as Flash Gordon 6, skippered by Chicago architect Helmut Jahn, rounded the top mark in first and never relinquished the lead. Nightshift just nipped Plenty at the line in a photo finish to take second.

Roepers is racing with a new crew comprised largely of Barking Mad alumni as newly-hired tactician Terry Hutchinson has brought trimmers Skip Baxter and Morgan Trubovich with him. It was a good opening day for Plenty, which also finished third in Race 2 before adding a fourth in Race 3.

"Considering this is the first regatta for this team and we are still coming together, I am very pleased with our performance today," Roepers said. "We had very good downwind speed, but we can certainly improve going upwind. Our mark roundings were solid and the crew did a good job of getting the sails up and down. Overall, it was just a nice, consistent outing."

Enfant Terrible, the Italian entry skippered by Alberto Rossi, hit the windward mark during the first rounding in Race 1 and had to do a penalty turn, leading to a 10th place finish. However, the reigning world champions sailed well the rest of the day in winning the second and third races. Vasco Vascotto is calling tactics aboard Enfant Terrible, which led from start to finish in Race 2 then passed Struntje Light (Wolfgang Schaefer, Germany) on the first downwind leg in Race 3, held in a building breeze that reached 23 knots.

Enfant Terrible, the Italian entry skippered by Alberto Rossi, recovered from a 10th place finish in Race 1 to win Race 2 and 3 at Midwinters, being hosted by Cabrillo  Beach Yacht Club.

"We had some problems in the first race, but we pulled it together after that," Rossi said. "We had really good starts in all three races. The boat is going well and we had really good maneuvers. Vasco did a good job of calling the shifts and we didn't make any more mistakes in the second and third races."

A bit of class history is on display as the first Farr 40 ever launched is competing in the Midwinter Championship. Flyer, owned by Santa Barbara resident Stanford Shaw, is Hull No. 40001, which was built by Carroll Marine in 1997 for Newport owner Steve Garland.

Originally known as Wired, the boat lived in Chicago under two different owners before being taken to the West Coast by a fourth. Shaw, who has dreamed of owning a Farr 40 since he was a boy and first saw Groovederci and Crocodile Rock racing out of the Santa Barbara Yacht Club, found Hull No. 40001 in serious disrepair at Long Beach Yacht Sales.

"I put a lot of love into getting her back in shape," said Shaw, who spent three years rehabilitating the boat. "There wasn't even a spinnaker pole or any winches. It's been a real chore, but I'm proud of the final product."

Farr 40 Midwinters marks the first major regatta for Flyer, which debuted at Long Beach Race Week. Shaw said he owes a debt of gratitude to Dirk Freeland, owner of the Farr 40 Skian Dhu, who provided advice and assistance with getting the boat class legal. "We finally have the boat in proper tune and it is performing beautifully," he said.