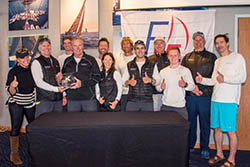 Skipper Alex Roepers and the Plenty team have set the standard in the Farr 40 class while capturing consecutive world championships.

Plenty opened the 2018 campaign with another victory after getting all it could handle from longtime rival Struntje Light.

"We treated this as a warm-up regatta for the whole season and spent four days beforehand doing a lot of practicing," Roepers said. "I thought the team was pretty dialed in for the first regatta of the year and sailed the boat well. Obviously, we are very happy to come away with the win, but know there is still a lot of work to do in order to achieve the ultimate goal."

"There was one race when we had an issue at the start and another when we made a mistake with a mark rounding, but otherwise it was a typical Plenty performance," Roepers said. "That is one of the advantages Plenty has built up over the years - a consistency of crew that really makes a difference out on the race course."

Plenty employs a knowledgeable coach in James Lyne, who has worked with the United States Olympic program. Roepers said the daily debriefs with Lyne made it clear that improvement is necessary in order to capture a third straight world crown.

"This regatta we were not as sharp as we need to be. Clearly, we have work to do in terms of our time and distance and putting ourselves in a better spot on start line," he said. "Fortunately, our boat speed was good both upwind and downwind, our boat-handling was good and our mark roundings were good."

Plenty was pushed by skipper Wolfgang Schaefer and the Struntje Light team throughout the regatta, which began Wednesday and concluded Saturday. Renowned Italian professional Tommaso Chieffi called tactics for Schaefer, who won two races and placed second in four others.

"Struntje provided great competition. That is a very talented boat that is much improved from last season," Roepers said.

Struntje Light showed some slight rust with a couple on-course side starts. Good news for the German entry is that solid crew work and superb boat speed produced results of second and first in those two races.

"I am very encouraged because it seems we are in the game. In general, we can match Plenty on boat speed, which is a good feeling," Schaefer said. "If not for some bad luck, we would have been a strong competitor to win this regatta."

Competition got underway Wednesday in uncommon conditions for Cabrillo Beach. A squall line that came through just prior to racing shifted the breeze 90 degrees to the northeast. Principal Race Officer John Busch nonetheless completed three good races in 6 to 12 knot winds.

More rain and lack of wind led to a lay day on Thursday, but Cabrillo Beach delivered Chamber of Commerce conditions on Friday. A west-southwesterly breeze began in the 10-12 knot range and steadily built to 18-20 toward the end of the day. It was sunny and warm with six-foot swells on the Pacific Ocean, an ideal day for sailboat racing.

Struntje Light earned Boat of the Day honors after pretty much match racing Plenty in all four starts. Schaefer and crew got the gun in two races and placed second in the others.

"I was quite pleased with the way we sailed on Friday. It was a wonderful day on the water and we performed quite well," Schaefer said. "I believe we have a very competitive crew that works well together. We will only get better as the season goes along."

A fourth place in Race 3 proved costly for Struntje Light, which plans to practice for a couple days in advance of the upcoming Farr 40 North American Championship.

"We have not been in the boat for six months and it showed in a few instances," Schaefer said. "We lost the second race on Friday because of one bad tack. One poor maneuver - that is all. You cannot afford to make even one slight mistake against Plenty."

Owner-driver Mick Shlens led Blade 2 to third place in the overall standings and top honors among the three Corinthian entries. The Palos Verdes Estates resident and Cabrillo Beach Yacht Club member distinguished himself on the helm as Blade 2 took second in two races and third in three others.

"We sailed well and were competitive with the top two boats," Blade 2 tactician Steve Natvig said. "We've been doing a lot of practicing and it paid off out on the water. It was nice to be trading tacks with Plenty and Struntje Light."

Shlens has been fortunate to keep basically the same crew together for five years. Blade 2 may have an entirely amateur team on paper, but it appears quite professional on the race course. 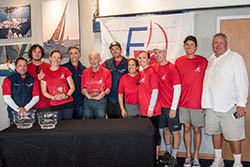 "Everyone is pretty good at their positions. When the breeze comes up, we can get the boat around the buoys without any problems," Natvig said. "When I put the boat in tight spots coming into mark roundings, the crew does whatever it takes to make things work."

Blade finished just seven points behind Struntje Light in the overall standings and 14 points ahead of Foil (Gordon Leon) among the Corinthian teams.

"Our goal was to win the side of the start line we wanted each time. We did that a few times and we were also over early a few times. So we have a few things we need to work on," Natvig said. "This was a great opportunity to gauge our speed against two really fast boats. It gave us some ideas of what we need to improve. We have a couple new sails on order for the North Americans and hopefully that will help a bit."

All competitors roundly praised the hospitality of the Cabrillo Beach Yacht Club, which has hosted the Farr 40 class many times now and always provided a first-class experience.

"I think Cabrillo Beach is one of the most sailor-friendly clubs that I've ever visited," Farr 40 class manager Brady Stagg said. "Sailboat racing is what they are all about and that attitude shows up in so many ways."

Competitors were pleased with the performance of PRO John Busch and the CBYC race committee that is led by Jib Kelly.

"It was a really nice regatta, very well organized by the class and Cabrillo Beach Yacht Club," Roepers said. "We really enjoy coming here because we are treated so well."

Class representatives expect a healthy fleet for the Farr 40 North Americans, which have been pushed back one day and will now be held May 10-13 out of Long Beach Yacht Club.